To Read: How to Prepare Your Digital Life for Your Death

How to Prepare Your Digital Life for Your Death by Eric Ravenscraft | PC Magazine (May 21, 2021)
"Death is as somber as it is inevitable. But as we live more of our lives online, it's more important than ever to make sure loved ones can access digital accounts when we're gone. Don't be the guy who locked cryptocurrency exchange customers out of $250 million after his death because only he knew the password.

There are a number of ways loved ones can request access to your accounts once you're gone, but they don't need that stress. Several online services allow you to designate legacy contacts or grant access after a period of inactivity. Here's how to make sure those you leave behind can manage your affairs after you head to the great beyond."
- May 21, 2021
Labels: Articles, Death Positivity, Planning and Preparing

To Read: How to Practice

I wanted to get rid of my possessions, because possessions stood between me and death.

"Holding hands in the parking lot, Tavia and I swore a quiet oath: we would not do this to anyone. We would not leave the contents of our lives for someone else to sort through, because who would that mythical sorter be, anyway? My stepchildren? Her niece? Neither of us had children of our own. Could we assume that our husbands would make order out of what we left behind? According to the actuarial tables, we would outlive them.

Tavia’s father died when she and I were fifty-six years old. At any other time, we might have been able to enjoy a few more years of ignoring the fact that we, too, were going to die, but thanks to the pandemic such blithe disregard was out of the question."
And:
"This was the practice: I was starting to get rid of my possessions, at least the useless ones, because possessions stood between me and death. They didn’t protect me from death, but they created a barrier in my understanding, like layers of bubble wrap, so that instead of thinking about what was coming and the beauty that was here now I was thinking about the piles of shiny trinkets I’d accumulated. I had begun the journey of digging out."
- March 10, 2021
Labels: Death Positivity, End of Life, Grief 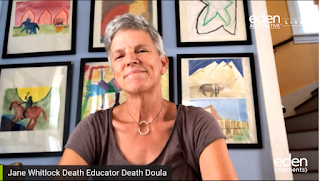 "Jane Whitlock, End of Life Doula and Death Educator comes to you today to invite you to be curious with her about the role of a bucket list in preparing for end of life."
Find out more about Jane Whitlock's work on her website at http://www.deathdoulajane.com/.

"Death. It’s a taboo topic for many — some avoid the topic altogether. But there are those who confront it head on and help the rest of us do so, too.

They’re called death doulas. Similar to birth doulas, who work with families at the early stages of life, death doulas help at the end."

To Read: The Surprising Benefits of Contemplating Your Death

The Surprising Benefits of Contemplating Your Death By Sigal Samuel | Vox (August 12, 2020)

"Mortality might seem like a scary thing to contemplate — in fact, maybe you’re tempted to stop reading this right now — but that’s exactly why I’d say you should keep reading. Death is something we really don’t like to think or talk about, especially in the West. Yet our fear of mortality is what’s driving so much of our anxiety, especially during this pandemic.

Maybe it’s the prospect of your own mortality that scares you. Or maybe you’re like me, and thinking about the mortality of the people you love is really what’s hard to wrestle with.

Either way, I think now is actually a great time to face that fear, to get on intimate terms with it, so that we can learn how to reduce the suffering it brings into our lives."
- February 22, 2021
Labels: Articles, Death Positivity, Planning and Preparing

To Read: Death Positivity in the Face of Grief

"There’s so much potential inside what we know as death positive people, but there is a chasm there, between the ways we talk about death in the abstract, and the ways we live inside actual death and grief.

We’ve got to start talking about grief in the face of deaths that are not beautiful."
"What we’re really doing, in both the death positive movement and its sister, the grief movement, is turning towards what feels scary and painful. We’re building skills, and gathering knowledge – not to avoid grief, but to withstand it. To able to companion each other, no matter what comes."

To Read: When COVID Upended Her Career Plans, A Local Mortician Stepped Forward To Help Families Deal With Death

When COVID Upended Her Career Plans, A Local Mortician Stepped Forward To Help Families Deal With Death By Andy Steiner | MinnPost (6/2/20)
"Woosley had grown increasingly disenchanted with the modern Western approach to death and dying, the idea that families needed to be separated from their deceased loved ones, that funerals must take place in impersonal chapels, that the terminally ill must spend their last months on earth fighting death rather than reflecting on their lives."

"She gave her notice at the university, earned end-of-life doula and funeral celebrant certifications, created a website and set out to build connections for her business. “My next step was going to be outreach to nursing homes and senior living facilities, to start forming connections with staff and residents,” she said.

To Read: Everyone Deserves a Death Buddy

Everyone Deserves a Death Buddy By Aisha Adkins | The Order of the Good Death (April 27, 2019)

"Our discussions ranged from the deep and somewhat ethereal, like what life after death is like, to the more practical, like whether or not people should tag dead friends on social media as though they are still living. We did not always share the same thoughts and ideology about death; Elly’s earthy spirituality did not align with my Christian-Judeo faith. But despite our different perspectives, we kept the conversation going."
"If you are interested in finding your own Death Buddy, I suggest you look for someone who:

To Do: Lakewood Cemetery Stroll

"The outdoors can be a peaceful respite from the stress of these difficult times. Our gates remain open each day for visiting and walking the grounds. With over 250 acres and over 11 miles of roads, Lakewood is happy to provide a safe place to walk—with plenty of room for social distancing. We are excited to release this Community Burial Areas Cemetery Stroll, which shares the history behind some of Lakewood’s shared sites of remembrance."
- January 24, 2021
Labels: Death Positivity, Minnesota, Respite

To Read: Women Take the Lead in the Death Positive Movement

"Bareham is just one of many women who are disrupting the death paradigm by challenging our traditional funerary practices and advocating for transparency, eco-friendly options, and family involvement. While White patriarchy has spent the past hundred years shutting the doors and pulling the curtain—obfuscating and profiting from one of life’s most significant milestones—modern women are questioning whom our current system is serving and telling the funeral industry that its time is up.

Make no mistake, the future of death is a feminist one."
- January 18, 2021
Labels: Articles, Death Positivity

To Read: How the COVID-19 Pandemic May Permanently Change Our "Good Death" Narrative

How the COVID-19 Pandemic May Permanently Change Our "Good Death" Narrative by Cody J. Sanders | Religion Dispatches (Apr 2, 2020)
"Periodically, a crisis disrupts the possibility of that Good Death for a whole society. We are now living through―and dying within―such a disruption. The global pandemic of COVID-19 will challenge our potential for a Good Death in ways we haven’t imagined or prepared for."
- January 08, 2021
Labels: Articles, Death, Death Positivity, Pandemic Loss

To Read: Talking About Death During COVID-19

Talking About Death During COVID-19 by Louise Hung | The Order of the Good Death (Mar 25, 2020)
"COVID-19 has us all thinking about the same thing: death.

Death in numbers, death in its potential, death as a threat. Death as something that has crept into the back of our minds and has taken up residence.

For many of us, even those who are accustomed to talking about death or consider themselves death positive, the topic of death might suddenly feel taboo. Too real. Too grim.

So to help you navigate death talk in the time of COVID-19, here are a few questions you may be asking yourself and some advice on how to handle them." 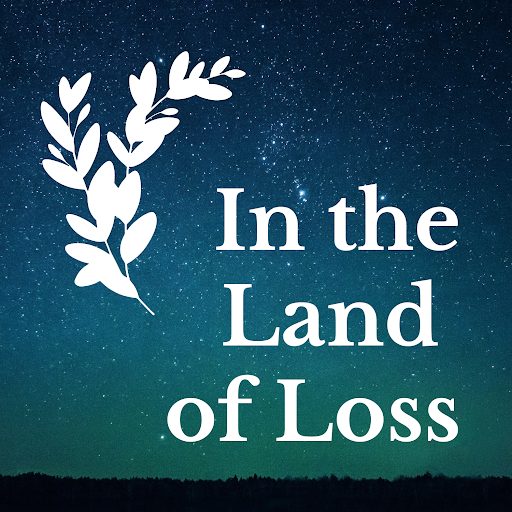 In the Land of Loss is devoted to sharing resources that explore the vast world of end-of-life care, death, grief, mourning, life, loss, and love.